Back in 1996, the Outsidaz were affiliated with Detroit-based rap collective D12, collaborating with them on different projects. D12 member Bizarre introduced the group to Eminem, who shouted them out on The Slim Shady LP. He also acknowledges them in a track titled "Till Hell Freezes Over" which was intended to be on the album.

They recorded the track "Macosa" together. They also recorded the song "Rush Ya Clique". Also they did "Take The Whole World With me". And Hard Act to Follow.

A rift developed between Eminem and Tha Outsidaz when Young Zee and Pace Won each recorded verses alongside Bizarre for the 'Amityville' track on Eminem's major label sophomore, The Marshall Mathers LP.

Dr. Dre complained that Eminem had too many guests on the album, so Pace Won and Young Zee's verses were removed from the track. In a 2015 interview, Pace Won indicated that the original version of the track was probably permanently erased, and as yet, this would appear to be the case, as it has not yet emerged from the vaults. Eminem's Shady Records label released Shady XV, a compilation album which featured a track titled, "Fine Line" by Eminem. On the song, he spits a verse showing his appreciation for the group (specifically Pacewon and Young Zee).

Later on once the beef started Pace Won recorded "Rap Music" as a diss towards Eminem that he never responded to. He also released "Love Changes" & "The Joker", which are 2 additional Eminem disstracks.

Some people forget or don't know that when the SSLP hit Proof and Eminem were on the outs and D12 wasn't really a thing at the time. Royce was his hype man and his crew (who he shouts out two or three times on SSLP is the Outsidaz). Then when Royce flaked and Marshall made the call to Proof all the sudden things flipped. It was D12 that got signed, Royce was gone, the Outsidaz were completely neglected. He stopped contacting them and the narrative became that Proof and D12 were always the plan. Maybe they were, maybe they weren't but in the late 90's he was running heavy with the Outsidaz and they had quite a few buzz worthy tracks. Actually as a crew Eminem had more pre fame success with the Outsidaz than he did D12.

If you’ve heard “Fine Line,” a song off Eminem’s Shady XV compilation project, you heard Slim give a shout-out to the Outsidaz, a group of MCs who he worked with before he became one of the culture’s most successful rappers of all time. So, what did Young Zee, one of the Outsidaz, do when he heard about the shout-out?

He penned “Dear Shady,” a stinging ode to an old friend. On Jan. 5th, Zee dropped a companion video for the response track that features old footage of the crew and a young Eminem. Pacewon also released a song called "He Said It", in which he explains his part of the story.

Since then, Az Izz has dropped a couple of Eminem disstracks like "What I Can't Say", "Soup Of The Day, "The Come Up", "Ain't Sayin Nothing" & "Product Of Espionage". We're going to take a look at their entire history today with unseen Eminem footages & songs before his fame. 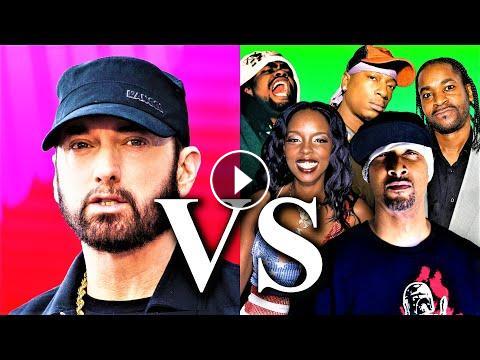