The feud between Nas and JAY-Z was a gladiatorial battle between two rap titans. They started off with subliminal jabs and moved up to body sh*ts. Fans cheered on. Crews got in the mix. Things got so personal that parents had to step in. Thankfully, the battle didn't end in tragedy like Biggie vs. 2Pac. It ended in triumph and friendship. JAY-Z and Nas would later shake hands and join forces.

Large Professor said there was a more "Malicious" version of Ether produced by Swizz Beatz & featured the line, "It should've been you in that plane crash" (referring to the plane crash Aaliyah died in)

Apparently the original version of "Ether" made by Nas, was much more aggressive and harsher than the one we have all heard. And obviously it has even better lines than the original.

Because Colombia asked him up to 3 times to edit the songs, that is probably the big reason why in certain points of Ether sounds like Nas is filling in spaces. This video covers the 2 leaked verses in text form.

Carmen Bryan opened up to VladTV in an exclusive interview about being at the center of Jay Z and Nas' legendary beef. She explained that after breaking up with and moving away from Nas, she started dating Jay Z after first becoming friends.

During the conversation, Carmen shut down rumors that Memphis Bleek started the beef, as she said she feels bad for Bleek and blames Jay Z for ending his career. Carmen also revealed that she confronted both Jay Z and Nas about the beef.

Let's backtrack to an earlier time when JAY Z and NaS vied for New York supremacy in one of the greatest hip-hop battles of all time.

Nas swiftly responds with a scathing freestyle over Eric B & Rakim's "Paid in Full." On the freestyle later dubbed "Stillmatic" (aka "H to the Omo"), Nas runs through a list of charges against Jay. According to Nas, Jay is a fake hustler, a liar, a phony. Nas questions Jay Z's s*xuality, dubs him the "fake King of New York" and mocks him for sampling his songs ("I count off when you sample my voice.")

Jay Z couldn't have wished for a better response. He knew Nas would take the bait. So Jay returns to "Takeover" and tacks on the final verse he'd been saving for Nas with a few alterations.

Cooly riding the bassline is Jay Z. Jay explains with biting wit that Nas and Prodigy are fake thugs who lie about their rep. After two full verses of Mobb Deep disses, Jay Z turns his attention to Nas for the next 32 bars. With scholarly focus, Jay Z outshines Nas' earlier attacks on "Stillmatic" Freestyle while launching a few missiles of his own.

Nas dubbed Jay a fake hustler. Jay replies that Nas didn't live the street life, he "witnessed from his folks pad." He adds that Nas had never seen a TEC-9 until Jay showed him one while on tour with Large Professor. Large Pro would (somewhat) confirm this story later.

Nas said he "counts off" when Jay Z samples his songs. Jay replies that Nas made it a hot line, but he (Jay Z) made it a hot song.

One of the most powerful lines on "Takeover" arrives on the third verse: "Because you know who did you know what with you know who/But let's keep that between me and you." Only three people know what Jay is talking about here: Jay Z, Nas and You-know-who. Jay is baiting Nas, daring him to respond.

Not responding wasn't even an option for Nas. The only question remaining is "How do you recover respond to a song as effective as 'Takeover'?"

"Ether" cracks the streets of New York with a 38 Special. You hear gunshots, then a chopped and screwed 2Pac barking, "F-ck Jay Z." And with that, Nas dives right into a long list of insults. He calls Jay Z a "stan," mocks his Roc-a-Fella crew and questions his loyalty to Biggie Smalls ("Biggie's your man, then you got the nerve to say that you're better than Big.")
#hiphopuniverse #hiphopbeefanalysis 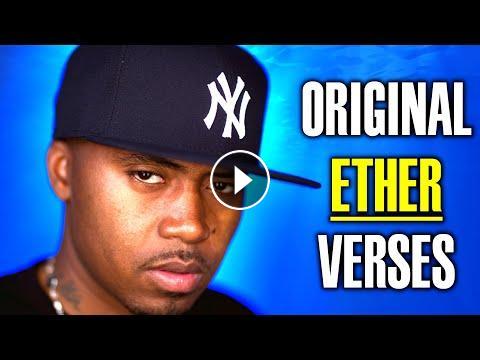