In this video, Mike and Jess react to "A Whole New World" by Morissette and Darren Espanto.

"Johanne Morissette Daug Amon-Lamar (/mɒrɪˈsɛt/ MORR-ih-SET; born June 2, 1996), known professionally as Morissette and frequently also referred to as Morissette Amon, is a Filipino singer, songwriter, producer and former actress. She first rose to prominence when she was the runner-up on TV5's Star Factor at the age of 14. In 2012, she made her professional stage debut in the Repertory Philippines stage adaptation of Disney's Camp Rock in the role of Mitchie Torres. She competed in the first season of ABS-CBN's The Voice of the Philippines in 2013, where she became part of Sarah Geronimo's team." Read more here - https://en.wikipedia.org/wiki/Morissette_(singer)

"Darren Lyndon Espanto (born May 24, 2001) is a Filipino-Canadian singer, actor and director.
He first joined a competition at the age of ten, where he won the Masters Finals of the Pinoy Singing Sensation competition in Edmonton. He made his first television appearance at the same age when he joined YTV's reality television The Next Star in 2012; he became the youngest finalist in the history of the show to be included in the Top 6. However, he rose to prominence after joining the first season of The Voice Kids Philippines. On June 1, 2014, Espanto became a part of ABS-CBN's Star Magic." Read more here - https://en.wikipedia.org/wiki/Darren_Espanto

????If you would like Mike to have more tissues or just want to send us something, you can send it to the address below friends????
PO Box 368
Orange Park, FL 32067 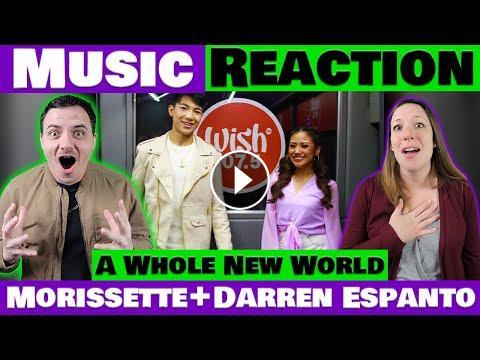 In this video, Mike and Jess react to "A Whole New World" by Morissette and Darren Espanto. "Johanne Morissette Daug Amon-Lamar (/mɒrɪˈ...