18 Views
Game The Black Slim Shady (EMINEM Diss) Review/Analysis/Rant/Reaction, Did The Game Destroy EMINEM or was the diss trash?

The Game has released his new album Drillmatic: Heart vs. Mind, which features 31 songs and a stacked list of big name guests. It also includes a new song called “The Black Slim Shady,” which is an over-10-minute elaborate diss track targeting Eminem. Throughout the song, the Game makes references to Eminem’s biggest hits, matching the rapper’s flow and parodying his history of pop cultural references while taking shots at him. Listen to the song below.

The track begins with a skit where the Game is being driven by an Uber driver, who is revealed to be Matthew, the younger brother of the titular narrator in Eminem’s “Stan.” Matthew, as portrayed in “The Black Slim Shady,” is not a fan of Eminem’s more recent work. The Game, of course, becomes aggressive with Matthew, who drives the rapper to Eminem’s home.

It’s a song that includes jabs about Eminem’s history with drg add*ction and raises questions about his history of cultural appropriation in light of his fashion choices and history of surrounding himself with Black artists. He makes specific references to 50 Cent, with whom the Game has been feuding on and off for the past 17 years. He also mentions Dr. Dre, Eminem’s daughter Hailie, his ex-wife Kim, his parents, and his manager Paul Rosenberg. At one point, the Game argues that Big Sean is Detroit’s best rapper. (Big Sean is featured on Drillmatic: Heart vs. Mind’s “Stupid.”)

“The Black Slim Shady” ends with a taunting challenge: “Mr. Shady, don’t be shady/Pick that pen up, don’t be lazy/Call up Dre and get that Dre beat.” Pitchfork has reached out to Eminem’s representatives for comment.

For months, the Game has been teasing the new song. He explained in an April interview on Fresh Pair that his interest in beefing with Eminem is a direct result of his feud with 50 Cent. “Because 50 can’t rap, so I’ve gotta go a level up and challenge the better rapper,” he said (before couching his criticism by praising the TV shows that 50 Cent has produced in recent years). “Nobody really takes shots at Eminem off this pre-conceived notion that he’s better than everybody. Well I want action, and I want it today.” He continued:

If you’re a “rap god,” control me. Put me down. Put me in my place. Let me know. Because if out-raps me, I’m gonna feel like sh*t. He got it. I’m talkin’ about Hov and Nas, I’m talkin’ about “Takeover” and “Ether.” Because one of them has to feel like they one. I’m just sayin’ let’s have our moment, or I’m gonna have it by myself.

The last time Eminem released a full diss track targeting one specific artist was 2018’s “Killshot,” which was a response to a Machine Gun Kelly track called “Rap Devil.”

Eminem is going into the Rock & Roll Hall of Fame class of 2022, and he performed at the Super Bowl halftime show with Dr. Dre, Kendrick Lamar, 50 Cent, Snoop Dogg, and Mary J. Blige earlier this year. He recently released Curtain Call 2, a greatest hits compilation that collects his work from the past 13 years of his career.

Other features on Drillmatic: Heart vs. Mind include Rick Ross, Lil Wayne, Ty Dolla $ign, A$AP Rocky, Jeremih, 2 Chainz, Pusha T, YG, Fivio Foreign, Ice-T, Cam’ron, Blueface, Chris Brown, and Chlöe. The late Nipsey Hussle was supposed to appear on a track titled “World Tours,” however, despite being listed with the album, it is unavailable on Spotify and Apple Music. 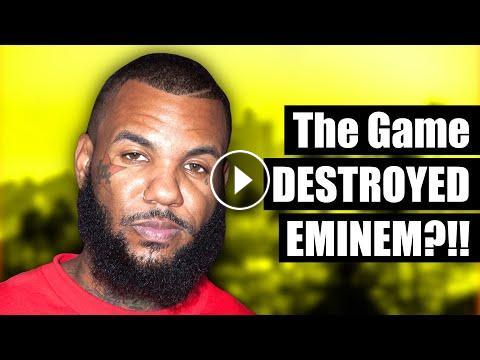 Game The Black Slim Shady (EMINEM Diss) Review/Analysis/Rant/Reaction, Did The Game Destroy EMINEM or was the diss trash? The Game Disses Eminem in 10...